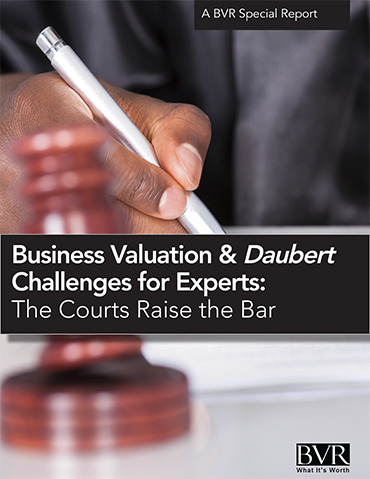 Financial experts working in litigation today have to prepare for a Daubert challenge. For attorneys seeking to attack the other party's financial evidence, Daubert motions have become one of the most used weapons in their litigation arsenal. Besides depositions, the motions represent a pre-trial opportunity to test the strength of the opponent's evidence and may encourage or mandate an early resolution of the case. To steel experts for what's to come, BVR is excited to offer Daubert Challenges: The Courts Raise the Bar.

This special report equips practitioners with case law, sample motions, practice tips, and check lists. In the report's nearly 350 pages, financial experts and lawyers share their unique insights into what it means to face a Daubert challenge and what it takes to survive one. No expert hoping to excel in the litigation arena can afford to be without this unique practice tool.

This publication and many more are also available for download with a subscription to the Digital Library or BVResearch Pro.
$159.00/PDF Add to cart
This is an approximate price based on the current exchange rate of {rate}. All purchases will be settled in USD.
Categories: business valuation standards & regulations case law & expert testimony financial expert services

Look Inside the Report >> 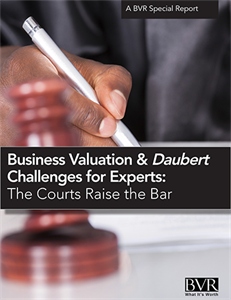