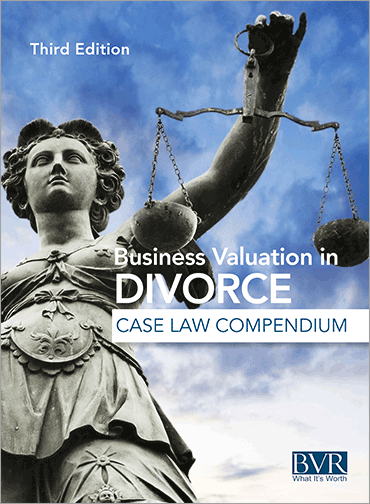 Please note: The third edition of this publication is no longer available for purchase. Please visit our website to purchase the new edition. Learn more >>

The most current analysis on how state courts throughout the country assess business valuation methods and view issues specific to divorce cases.

Divorce is a state law matter. Since different states have different statutes and case law pertaining to marital distribution, it can be difficult for attorneys and experts alike to keep up with key valuation developments. BVR’s new Business Valuation in Divorce Case Law Compendium, Third Edition is an indispensable tool for every divorce professional who wants to stay ahead of the game.

Now updated with the most recent court cases featuring divorce cases with a business valuation component, this must-have compendium contains 340+ divorce cases which grapple with key business valuation issues. It is organized into seven key topical sections so you can find the information you need quickly and easily. The new edition includes in-depth coverage from our acclaimed legal analysts as well as top business valuation experts, who report on disputes ranging from personal versus professional goodwill, discounts, tax affecting, and more. This one-of-a-kind legal resource saves hours of research with comprehensive coverage on the best (and worst) practices that attorneys and experts used in making their case in courts throughout the country.

Highlights of the compendium include:


Section I.  Divorce and Goodwill 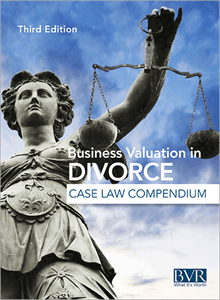