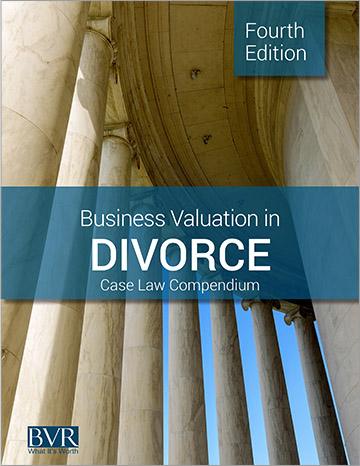 The most current analysis on how courts throughout the U.S. view business valuation methods and the issues that arise in divorce cases.

Divorce is a state law matter. Since U.S. states have different statutes and case law pertaining to marital distribution, it can be difficult for attorneys and financial experts alike to keep up with key valuation developments. With in-depth analysis from BVR’s legal team, the new Business Valuation in Divorce Case Law Compendium, Fourth Edition is an indispensable tool for every divorce professional to stay ahead of the game.

Now updated with five new chapters and 40 new cases that have helped shape the landscape of business valuation in divorce proceedings, this must-have compendium offers advice from top business valuation experts on how goodwill and S corporations are valued, and also offers insight into active/passive appreciation, double-dipping, fair value, and more. This one-of-a-kind legal resource saves you hours of research time with comprehensive coverage on the best (and worst) practices that attorneys and experts have used in making their case in courts throughout the country.

This publication and many more are also available for download with a subscription to the Digital Library or BVResearch Pro.
Add to cart
This is an approximate price based on the current exchange rate of {rate}. All purchases will be settled in USD.
Categories: marital dissolution/divorce


Highlights of the compendium include:

Section I.  Divorce and Goodwill

Look Inside the Guide >> 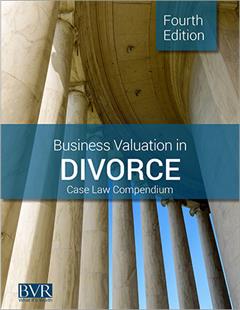