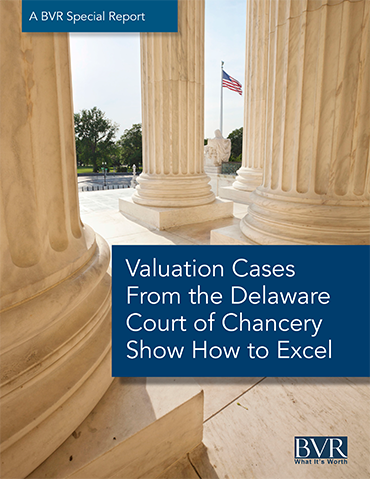 Recognized as the nation's preeminent forum for the determination of disputes involving private and publicly held businesses, the Delaware Court of Chancery has long been known to business appraisers and attorneys as the source of many of the decisions and guidelines which govern the valuation process across the country. Business appraisers are advised to read Chancery decisions because they are relevant in many valuation practice areas.

Valuation Cases From the Delaware Court of Chancery Show How to Excel is an important and one of a kind reference tool for your library. The court case digests and articles presented in this special report provide rigorous analysis of and insight into the court’s view of business valuation methodologies and valuation techniques.

This publication and many more are also available for download with a subscription to the Digital Library or BVResearch Pro.
$159.00/PDF Add to cart
This is an approximate price based on the current exchange rate of {rate}. All purchases will be settled in USD.
Categories: business valuation standards & regulations case law & expert testimony economic damages & lost profits financial expert services valuation for commercial disputes valuation for partnership agreements

Look Inside the Report >>