Note: Ayana Stubblefield wrote this post, which was originally published on the ktMINE blog. Republished here with the author's permission.

By the start of the 21st century, 50% of all basic research was credited to universities, some major examples being antibiotics, plastic, and even Google. Patent activity can offer insight into where the top universities (including colleges) across the world have recently been focusing their efforts, both geographically and industrially.

The top Cooperative Patent Classification (CPC) codes of patents filed worldwide by universities are related to “medical, dental, or toilet purposes.” This has been the top patent type for the past decade, as seen below, with the only variance occurring in 2016. This exception was likely influenced by a shift in 2016 within the patent activity that took place in China—home to the top university/college patent owners worldwide.

Let’s dive deeper into the trends of patents filed in China by universities (worldwide). In 2016 and 2017, China experienced an influx of patents filed by universities related to the analysis of “materials by determining their chemical or physical properties.” This G01N patent type took the top position worldwide in 2016, indicating the influence of China in worldwide trends. Within this same time frame, there was a major increase in patent activity with “electrical digital data processing” and “chemical or physical processes,” both also reflected worldwide. 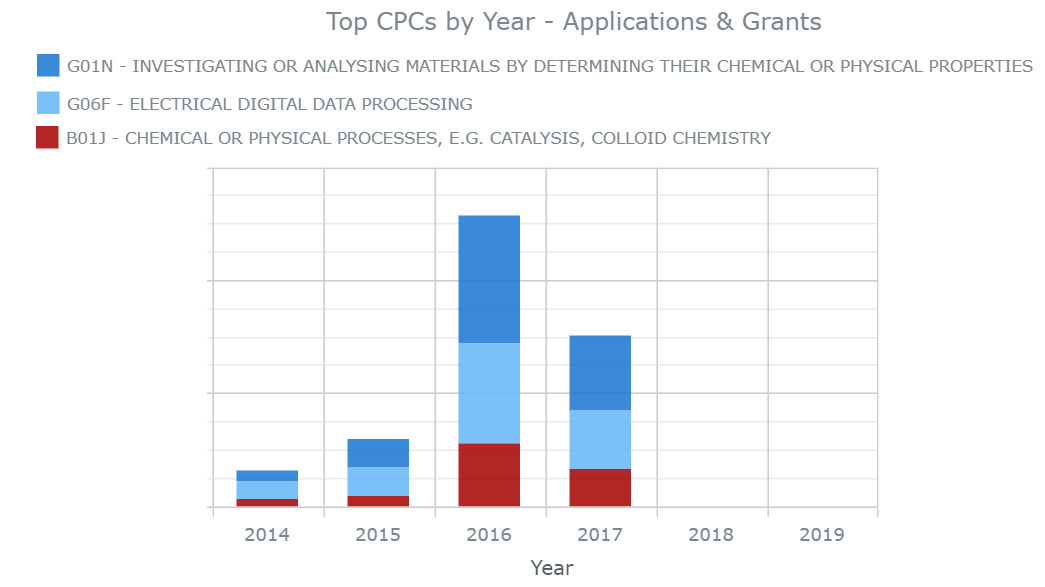 Historically, the most filed patent has fluctuated between “reduction of greenhouse gases emission, energy generation, transmission or distribution” and “climate change mitigation technologies in the production or processing of goods.” These two environment-related patent types fall fourth and sixth among total patents filed worldwide. In fact, when you take the patents filed in China out of consideration, the patents related to greenhouse gas fall to ninth, and climate change does not rank in the top 10 most filed patent types. With China having the largest number of patents filed by universities, this influence is expected.

Following China in top university-owned patents is the United States. Overall, most of the top CPC codes in the U.S. also made the rank worldwide, the exceptions all being patent types that had increased activity in China.

While both the climate change and greenhouse gas-related university patent filings have been growing in the U.S., the count is simply not high. This is likely due to the lack of government consensus regarding the environment and smart grid funding since 2009.

Recent Trends in the U.S.

Although the number of environmental patents filed by universities overall did not make the top 10, regarding cumulative patents since 2014, greenhouse gas patents rank 10th.

The only time frame in which an environmental patent ranks in the U.S. Source: ktMINE Patent App

In addition to the 2016 surge in chemical patents, “specific therapeutic activity of chemical compounds or medicinal preparations” has been on the rise. Entering the U.S. ranks at 10th in 2015 and worldwide in 2017, as of last year, this patent type has jumped to sixth in the U.S. and fifth worldwide based on the patent filings that have been accounted for thus far in 2018. 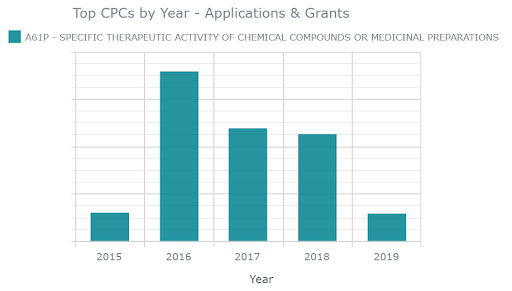 The emergence of "specific therapeutic activity of chemical compounds or medicinal preparations" patents being filed in the U.S. Source: ktMINE Patent App

The Future of University Research

The potential impact of higher education’s focus on the environment (indicated from their filings) can be seen today. Patent activity in the U.S. has manifested in the pharmaceutical/healthcare industry, an area which has shown consistent patent activity from universities throughout the years. China’s government has more control over the research that’s completed in relation to energy because of their monopoly over the sector. While in the United States, the focus of research and innovation is influenced by factors inside, as well as outside, the government such as media and mass demand. Currently, the global influences in these two major countries seem to reflect either a push to aid humans or the planet; let’s hope there is a tie.

About the author: Ayana Stubblefield: As a research analyst at ktMINE, Ayana works with the data team to analyze intellectual property documents and related news data for our IP platform.