Over the last decade, one trend is certainly clear: Intellectual property (IP) accounts for an ever-growing percentage of business value in many industries. Let’s take a look at some other interesting trends that have taken shape in the world of IP over the past 10 years, based on statistics from thousands of actual license agreements in the ktMINE  database. The data aggregated for this year-on-year review have been normalized to allow the prevailing trends to shine through.

Note: This post was written by Eric Podlogar and was originally published on the ktMINE blog.

Almost as a rule, royalty payment agreements are written as a percentage of sales, either net or gross. A completed sale ensures the fulfillment of the agreement. On the other hand, other factors and costs complicate royalty payment agreements based on profit. While agreements with royalty rates based on sales still remain high, alternate forms of royalty rate payment bases have increased in volume since 2015. Royalty rates based on net profits, gross profits, and especially costs have become more prevalent. We also observe that those agreements taking assets or operating profits into account have tapered off in recent years.

The chart below takes a closer look at net sales, the most widely used base. Notice that the average annual royalty rate peaked in 2010 at just over 15%, before bottoming out in 2014, at nearly 9%. Since then, the annual royalty rate has climbed steadily and sits at 13.2% for 2016. This upward trend may indicate a recovery in asset valuation, perhaps attracting more assets into the market and foreshadowing more transactions. 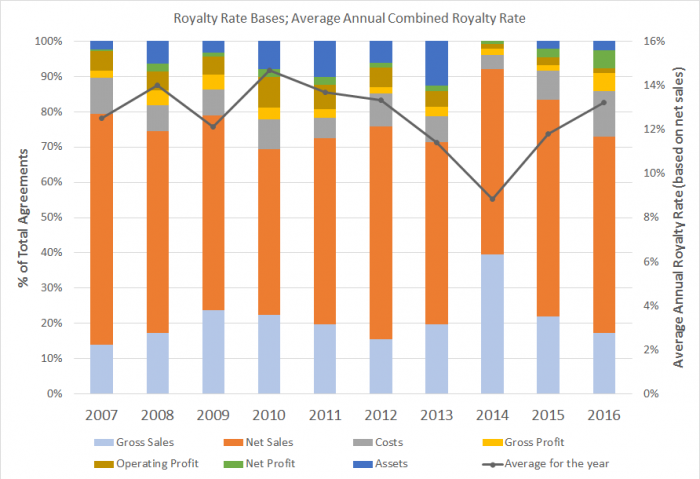 Which Industries Are Transacting?

According to the ktMINE database, the bulk of transactions are occurring in a handful of industries. In 2007, the top five industries accounted for 46% of all transactions, whereas, in 2016, they accounted for 55% of the total. Most industries appear to have weathered the effects of the Great Recession between 2007 and 2009. However some, such as biotechnology and pharmaceuticals, are on a dramatic incline. Alternatively, industries such as consumer services and business services are either trending downward or are stagnating. 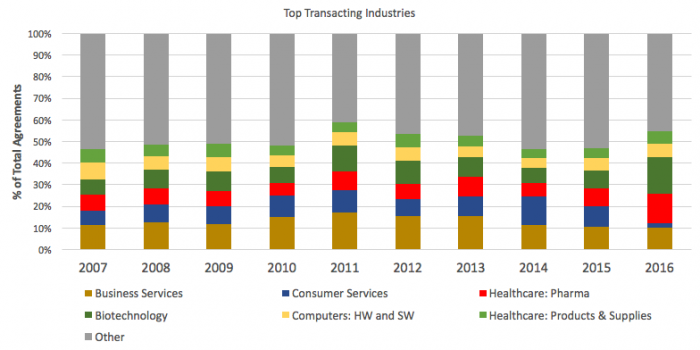 What Types of Agreements Are Transacting?

In keeping with the diminishing activity in consumer services and business services industries, the percentage of service agreement types is also dropping. Software, joint development, and asset purchase agreements have seen intermittent activity since 2013. We also observe a steady uptick in manufacturing/process intangibles agreement types. The recent recovery of marketing intangibles might be related to an uptick in mergers and acquisitions activities, perhaps indicating an increase in brand turnover or brand management.

Based on ktMINE’s royalty rate data over the past 10 years:

For additional statistics on license agreements and royalty rates in certain industries and specific types of intellectual property, check out the BVR/ktMINE Royalty Rate Benchmarking Guide, 2017/2018 Global Edition. To access more granular data based on your custom search parameters, explore the ktMINE database, available from BVR.