The new Formula 1 racing season begins in March, and Ferrari is the first team to reveal its prize entry. The F150 (reportedly named to commemorate the 150th anniversary of the unification of Italy), was launched on Wednesday … including a new web site where photos and stories can be accessed by Formula 1 fandom.

According to Reuters, Ford immediately sued Ferrari for trademark infringement. The Ferrari “F-150 logo bears striking resemblance” to the one on Ford’s well-established pick-ups.  Ford wanted Ferrari to stop using the name and asked for damages under the Anticybersquatting Consumer Protection Act.

Ferrari reacted with blinding speed  to the threat of legal action by renaming its car the “F150th Italia,” even to the point of rewriting a January 25 story and inserting the new name.

This will probably work to drum up Ferrari and Formula 1 interest, and certainly F150th Italia pictures are now flooding the internet.  What I haven’t seen yet is the reprise of  the 2005 photograph depicting when Ford and Ferrari met once before. 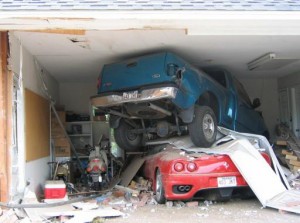