We all know the old saying, “work smarter, not harder.” We are creatures of habit, and our brains work just the same. When we establish routines, we can carry out tasks faster since we don't have to think about the task. When it comes to saving time and effort when performing economic research, where is the best place to start given the current climate due to the coronavirus pandemic?

The Economic Outlook Update (EOU), published by Business Valuation Resources, reports digest expansive research from the leading authoritative sources into one convenient report. Get a sneak peek of our April 2020 EOU with these four charts showing key insights on consumer confidence, retails sales data, unemployment, and more amid the pandemic. 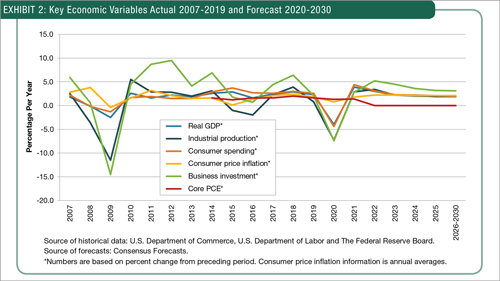 The Conference Board, a member-driven think tank that delivers trusted insights for what’s ahead in the economy, calculates a Leading Economic Index (LEI), which decreased 4.4% in April, to 98.8 points. The continued downward spiral of the LEI in April comes on the heels of the largest decline in the history of the index in March, which was the result of the economic damages caused by the coronavirus pandemic. The sharp drop in the LEI was driven by negative contributions from most underlying components except from stock prices and the interest rate spread, with the report noting that the weaknesses among the leading indicators have become more widespread.

The National Federation of Independent Business’ (NFIB) Small Business Optimism Index decreased 5.5 points in April, to 90.9 points. The spread of the coronavirus led to the second consecutive month of declines as small-business owners were forced to shut down nonessential businesses and those that were able to remain open saw a slowdown in business activity due to the shelter-at-home mandate by the government. The report did, however, highlight that small-business owners are certain the economy will weaken in the near term but were expecting it to improve over the next six months. In April, the Small Business Uncertainty Index fell 17 points, to 75 points, a decline from the March score of 92, which had been the highest score since March 2017. 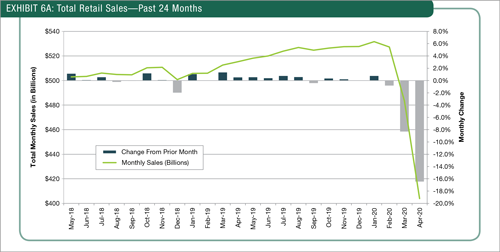 U.S. retail and food services sales plunged 16.4% in April, which, for the second consecutive month, was the largest monthly decline since the start of the data series, which began in 1992. The sales figures for April came in worse than forecasts for a decline of 12.3%, according to a poll by the Dow Jones. The report did include an upward revision to the sales figures for March, which shows sales declining by 8.3% instead of the 8.7% originally reported. Government-mandated business closures and stay-at-home orders to mitigate the spread of the coronavirus kept consumers at bay for the second consecutive month. Looking forward, some economic data points are expected to turn around now that various parts of the country are relaxing restrictions and allowing businesses beyond those deemed essential to reopen, so there is some hope that the retail sales figures in April reached their lowest level. Economists view retail sales as a key economic indicator since consumer spending accounts for nearly two-thirds of the U.S. economy.

Total nonfarm payroll employment reported losses of 20.5 million jobs in April, which is the second consecutive month of declines caused by the coronavirus pandemic. As a result of the 20.5 million jobs lost, the total number of people employed stands at its lowest level since January 2011. The job losses in April are the clearest picture to date of the impact the coronavirus had on the labor market, with the April figure being the worst on record, dating back to 1939. For perspective, during the global financial crisis, the worst monthly figure was a loss of 803,000 jobs in March 2009. The April job report also contained downward revisions to the prior two months’ figures, with the February rate showing gains of 251,000 jobs instead of the 275,000 originally reported and the March rate decreasing from 881,000 jobs lost to 701,000 jobs lost, for a two-month total of 204,000 less jobs than originally reported.

Download the complete April 2020 issue of the EOU to see more stats on GDP, consumer spending, stocks and bonds, the real estate market, and more. Plus, learn about an annual subscription to the EOU, an ideal resource for the current economic conditions section of your valuation report.