An understanding of the economic outlook is fundamental to developing reasonable expectations about a subject company’s future prospects. And, in any business valuation, the general economic outlook as of the appraisal date should be considered, since the national economic outlook is often the basis of how investors perceive alternative investment opportunities at any given time.

BVR’s Economic Outlook Update (EOU) monthly and quarterly reports examine the general U.S. economic climate. In our most recent monthly report, we provide an overview of some selected economic factors that prevailed as of August 2018, as well as a discussion of the factors that are crucial over an extended period. Highlighted below are some of these important factors, including unemployment rate, consumer confidence, and more.

The Consumer Confidence Index surged 5.5 points in August, to 133.4, the second consecutive month of gains. At 133.4, the index has reached the highest level since October 2000, when it was 135.8. Consumer’s assessment of current conditions improved 6.1 points in August, to 172.2, from an upwardly revised score of 166.1 in July. The survey indicated that a greater number of consumers anticipated purchasing big-ticket items including homes, cars, and major appliances within six months.

The Small Business Optimism index set new a new record for the highest reading in the 45-year history of the survey. In August, the index rose 0.9 point, to 108.8. The respondents noted small-business owners have never been so optimistic, and, despite the difficulties in finding qualified labor, thanks to tax cuts, regulatory reform, and policies stimulating growth, small-business growth has never been better.

Total retail sales increased 0.1% in August, which marked the seventh consecutive month of gains. This figure fell short of economists’ forecasts for growth of 0.4%, according to a poll from Reuters. On a year-over-year basis, retail sales are up 6.6%. Core retail sales advanced 0.2% in August and were up by 5.9% over the past 12 months. 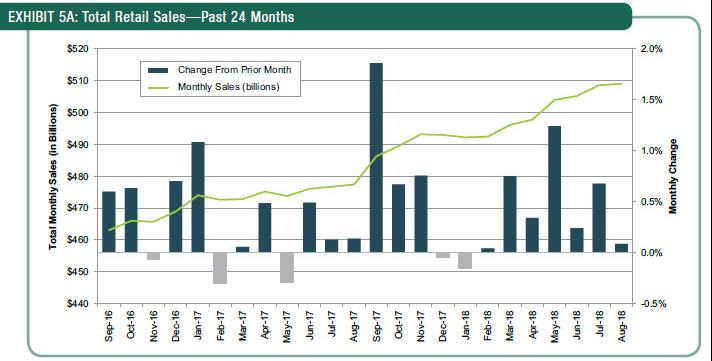 Employment  increased by 201,000 jobs in August, as gains in professional and business services, healthcare, wholesale trade, transportation and warehousing, and mining contributed to the rise. The positive job report in August lost some luster when figures for June and July were revised downward. Job gains in June were lowered to 208,000, versus the 248,000 that were originally reported, and July’s figures were revised to show a gain of 147,000 jobs versus 157,000 jobs. As a result, the net change resulted in 50,000 fewer jobs reported over the two-month period. In a separate report, the Labor Department said initial claims for state unemployment benefits remained near record lows. 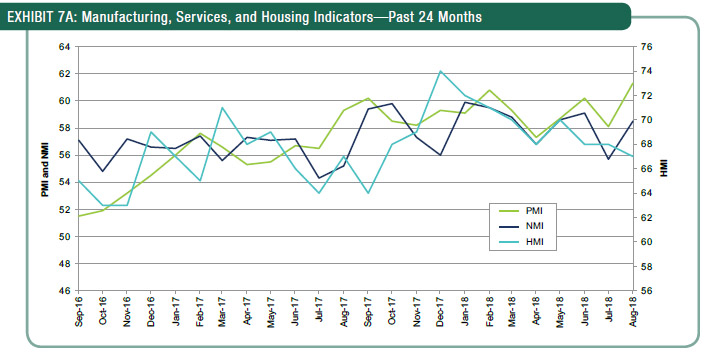 The Stock and Bond Markets

All major U.S. stock market indexes posted gains in August, and four of the five indexes reached record highs during the month. The Dow Jones Industrial Average rose 2.6%, while the S&P 500 Index advanced 3.3%. The Nasdaq Composite rose 5.7%, the S&P MidCap 400 advanced 3.2%, and the Russell 2000 advanced 4.3% in August. Volatility, as measured by the Chicago Board Options Exchange Volatility Index, ranged between 10.2 and 16.9 and averaged 12.5 for the month.