As a business valuation professional, at some point in your career you may be retained as a financial expert to work on a lost profits damages case. You’ll be responsible for gathering the financial evidence, interpreting it, and telling its story in a lawsuit or litigation setting.

Among a dynamic array of other topics, BVR’s newest publication, The Comprehensive Guide to Economic Damages, covers the common elements of lost profits damages cases. This excerpt from the guide discusses how a plaintiff typically must establish three elements to recover lost profit damages.

The party seeking an award of lost profits must show:

These three elements are commonly referred to as: proximate cause, foreseeability, and reasonable certainty.

The proximate cause element requires that the plaintiff tie damages to the wrongful act; lost profits are recoverable only when they can be traced to, and result directly from, the wrong to be redressed. This makes establishing causation essential to the plaintiff’s case because lost profit damages are not recoverable 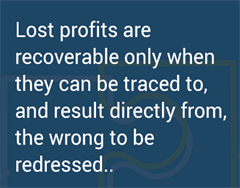 unless they “are direct[ly] and proximate[ly] caused by a defendant’s” wrongful act. When the profits are lost as a consequence of “a completely voluntary and independent business decision,” the plaintiff may not be able to meet this burden even if the defendant’s actions are a contributing factor underlying the plaintiff’s decision.

For example, in contract actions, foreseeability looks beyond whether the conduct was likely to cause damage. Rather, in contract actions, the question is whether lost profits damages were within the contemplation of the parties at the time they entered into the contract. To determine what was in the parties’ contemplation, the court will look to the terms of the contract, including “the nature, purpose and particular circumstances of the contract known by the parties … as well as ‘what liability the defendant fairly may be supposed to have assumed consciously, or to have warranted the plaintiff reasonably to suppose that it assumed, when the contract was made.’”

The issue of foreseeability in contract actions also requires a determination of whether the plaintiff seeks an award of general damages or an award of special or consequential damages. General damages are those that flow directly and necessarily or are a natural result of the breach of contract. Consequential or special damages, on the other hand, are those that are collateral to the contract; they are secondary or derivative, rather than those that restore the benefit of the bargain to the nonbreaching party. 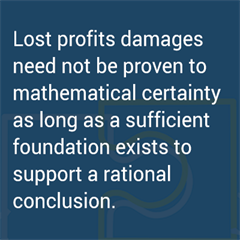 measurement based upon reliable factors without undue speculation.” When lost profits are “remote, speculative, hypothetical, and not within the realm of reasonable certainty,” they cannot be recovered.

Although the courts recognize that lost profits cannot be determined with absolute certainty, there are limits to what may be presented as lost profits damages. Indeed, as one court has aptly held, lost profits damages cannot be viewed as “the purchase of a winning lottery ticket [and] any lost profits award must be limited to the actual damages sustained.” In that case, the court reversed and remanded alost profits award, finding that “accounting alchemy” transformed a “humble enterprise” into “an engine of commerce.” Among the issues the appellate court raised was the failure by the plaintiff’s expert to include officer compensation as part of the expenses, which caused the assumptions to be based on gross rather than net profits. The court also faulted the expert’s use of a one-year increase in sales and profits to extrapolate a multiyear “positive trend.” If these issues were not sufficiently problematic, the expert also used the remaining six and a half years of the plaintiff’s leasehold as the recovery period for calculating the lost profits without establishing that profits would have been made for that entire time.

In short, the courts balance the understanding that lost profits cannot be calculated with mathematical certainty against the requirement that they be calculated using reliable evidence that does not require excessive speculation.

Looking for more on this topic?

Read the complete excerpt on the common elements of lost profits damages cases in The Comprehensive Guide to Economic Damages, edited by Nancy J. Fannon and Jonathan M. Dunitz. This comprehensive resource brings together the financial expert’s knowledge of accepted methods and procedures with the attorney’s knowledge of legal issues and insights. It includes a summary of the applicable rules of civil procedure and of evidence, as well as the rich and continually expanding case law that interprets what courts have accepted as evidence for damages claims—and what the courts have rejected and why.