A press release from law consulting firm Altman Weil provides multiple takeaways for business valuation professionals, all of which indicate that law firm mergers and acquisitions are poised to continue in historic numbers. The industry trend is toward acquisition as the favored method for established firms to find new business. 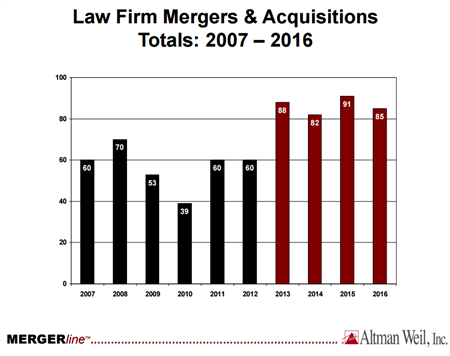 The total number of combinations dipped slightly, from a record-setting 91 in 2015 to 85 in 2016, which still marks the third-highest number in the past decade and the fourth straight year of 80-plus law firm combinations. With nine acquisitions already in January 2017, the demand for law firm valuation appears set to persist.

More notes from the release:

This information provides an opportunity for appraisers to begin or expand an element of their practice. Valuing law firms is a process with unique challenges, including unbilled work, goodwill, and excess working capital in some cases. This week's BVWire included a tip on another consideration when valuing a law firm: the "origination credit" aspect of compensation plans, which provides credits to staff for landing clientele but varies from firm to firm.

For more information on valuing law firms, look inside BVR's special report, What It's Worth: Law Firm Value. The report includes a checklist of special information to request in the valuation of a law firm, financial and valuation data, a demonstrative report, and more.

The complete list of 2016 law firm mergers and acquisitions is available at Altman Weil's site.