Insights into valuation of underwear brands

The underwear sector is a perfect example of market-based third-party royalty rates for trademarks often not fitting into a valuation for long-term ownership. Although often nonpublished, typical trademark royalty rates for underwear (includes woven bras, lingerie, and sleepwear) range between 5% and 12% depending on the brand. However, such royalty rates are often too high to pass the profit split test in business combinations. Underwear is a mature industry showing rather low profitability, growth prospects, and purchase price multiples.

There are two key findings here. First, a licensee of a brand or trademark may pay a high price (royalty rate) in a low-risk (short-term, ancillary business) setting that the licensee could not afford and would not accept in the long run. In other words, arm’s-length royalty rates tend to overstate the long-term value of an asset calculated at full cost and risk. And second, the relief-from-royalty method based on comparable uncontrolled transactions must pass a profitability (or profit split) check to avoid overstatement of value.

MARKABLES (Switzerland) has a database of over 8,200 global trademark valuations published in financial reporting documents of listed companies. 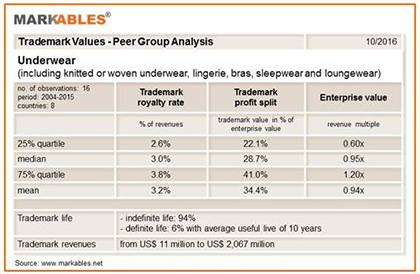 Please let us know if you have any comments about this article or enhancements you would like to see.
close