What is control worth? New update from BVR/FactSet

The median price paid for the benefit of acquiring a controlling interest dropped slightly, to 26.5%, during the second quarter, according to data from the FactSet/BVR Control Premium Study. Median premia were much higher, as usual, due to a few well-publicised private equity acquisitions, as shown in the table below, which includes the number of completed deals, as well as the average and median control premiums, from 2Q 2014 through 2Q 2019.

These averages tend to understate the value purchasers are willing to pay for control of UK business assets and for most transactions outside of North America. However, for the 2nd quarter, control premia outside North America also dropped slightly, to approximately 27%, down from 30% on transactions in the preceding quarter. Similar to most economic indicators, Brexit anxieties may play a role in this downward trend. 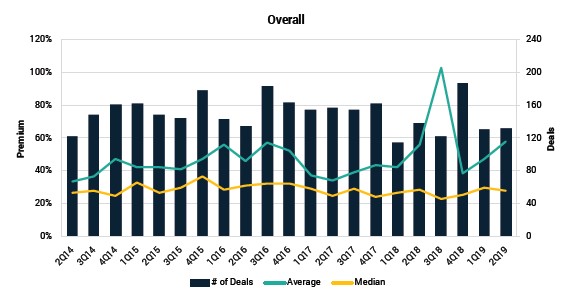 Please let us know if you have any comments about this article or enhancements you would like to see.