Debate continues on the tendency to overstate growth rates and exit multiples when calculating the terminal value component of a multiperiod DCF. This is particularly important for business valuers in the UK, where limited SME transaction comparables are available.

The January issue of Business Valuation Update points to two discussions of terminal-year value. First, Jim Hitchner (Financial Valuation Advisors Inc.) supports the use of exit multiples on the terminal year of a DCF model in his recent Hardball With Hitchner but argues that “[m]istakes happen when analysts don’t consider the reasonableness of the implied long-term growth rate embedded in the selected exit multiple.” Current growth projections are rarely maintained into perpetuity, though many forecasts—and business owners—claim that they will.

In fact, both the growth rate and the valuation date multiples calculated at the valuation date “nearly always need to be reduced” because of the increased risk and uncertainty of cash flows in the future (typically, three to five years in many DCF analyses), Hitchner states. It’s extremely rare that any company exceeds the economic growth rate in perpetuity after five years, so, referring to Hitchner’s analysis, a growth rate assumption implied by an exit multiple higher than 3 would seem optimistic. 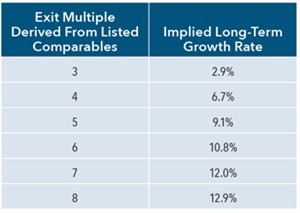 Hitchner points out that higher assumed exit multiples create the situation where “the terminal value is higher than the present value of the interim cash flows.” In these valuations, the single biggest determiner of value in a DCF analysis is the financial expert’s terminal growth rate assumption.

Another take: The Footnotes Analyst also examined the problem of using exit multiples in a series of recent articles. “If a valuation multiple, such as EV/EBITDA, is used to calculate a DCF terminal value, the multiple should reflect expected business dynamics at the end of the explicit forecast period and not at the valuation date,” the authors say. “This is best achieved by basing the exit multiple on forward-priced multiples for the selected group of comparable companies,” which they demonstrate with a series of examples. They also provide a downloadable model that business valuers can use to calculate their own DCF terminal values using forward-priced multiples.

The authors also discuss the choice of multiple, including why EV/EBITDA may not be the best. “In our view, this multiple has serious shortcomings due to the exclusion of depreciation and taxation. Effective tax rates and particularly capital intensity (the level of maintenance capital expenditure relative to other operating expenses) can vary considerably, even amongst companies in the same peer group.”

They believe it is “best to build the differences in capital intensity in the multiple used. This means using EV/NOPAT or, even better, use an adjusted form of NOPAT in which the depreciation is replaced by estimated maintenance capital expenditure.”

As to whether to apply the exit multiple to reported or adjusted profit, the authors conclude: “Profit forecasts used in DCF terminal values should be based on GAAP not non-GAAP performance, except that you should exclude amortisation of ‘replacement-expensed’ intangibles, unless making comprehensive adjustments to capitalise all estimated intangible investment.”

Please let us know if you have any comments about this article or enhancements you would like to see.
close